The cable industry, including access networks and operation support systems, is gaining momentum toward the inevitable network disaggregation. The adoption of modern approaches such as Software-Defined Networking (SDN) and Network Function Virtualization (NFV) results in a high degree of programmable network components, which is essential for the migration to Distributed Access Architecture (DAA).

While Hybrid Fiber Coax (HFC) has been around for over 20 years, most current cable networks rely on Centralized Access Architecture (CAA), where the access network involves a combination of coaxial RF and analog optical solutions. whereas the core network consists of CMTS and EQAM equipment. MSOs who followed CCA, until recently seen as a blessing, are now forced to keep pace with growing demand, continuing to find ways to enhance the service delivery network more quickly and cost efficiently drive the path to 10G technology and technology convergence.

MSOs are turning their attention toward Fiber Deep and Distributed Access Architecture (DAA) for their infrastructure. They require a robust technology solution that will not only save space and reduce power consumption but also meet rising customer demand and drive new revenue opportunities in the future.

Today’s hybrid fiber coaxial networks can be described as active with no intelligent processing happening in the outside plant. This kind of architecture has served MSOs very well. However, the time has come when the possibility of making a smart network is now a reality. Contemporary HFC architecture performs all the processing in a central headend, and then it goes out through fiber optic cables into the node in the plant and then on to the subscribers’ homes.  Distributed Access Architecture (DAA) is an evolutionary approach to transform the cable industry’s access infrastructure by decentralizing and virtualizing headend and network functions.

There are two main approaches of DAA: Remote PHY and Remote MACPHY. The difference between the two variants is based on which CCAP functions get moved to the node:

Distributed architecture based on the Remote PHY technology transfers the DOCSIS PHY layer to the digital optical node, converting analogue optical connections between the headend and the node into digital connections. The big advantage of this approach is the much higher infrastructure performance. Leaving the MAC layer inside the headend allows for easier control and scaling.

It provides a number of benefits for the HFC infrastructure. The introduction of digital optical connections allows operators to use solutions that are more cost-effective and have an established position in the industry. What is more, by using a wider spectrum and improving the connection’s noise parameters, it increases data processing capabilities.

Remote MAC-PHY focuses on pushing more of the smart functions to the access node, closer to homes at the edge of the HFC network. Shifting the MAC from the headend or hub makes a CCAP-core redundant. What remains are only routing, switching, and controller functions – a cloud-ready infrastructure. places the MACPHY access layer functions in the access node. In this approach, apart from the benefits of digital fiber, MSOs can free up a vast amount of room in the headend. RMACPHY supports the deployment of full duplex DOCSIS, which will enable symmetric multi-Gigabit upstream and downstream services over existing fiber coax plants. MSOs will also benefit from replacing analog optics with cost-efficient 10G Ethernet transport. And what is most important: MAC processing in the node is reducing the overall service latency. All of this will significantly enhance the network and service performance. However, distributing both the MAC and the PHY access layer functions requires a bit more computing power to secure.

The term OpenDAA was coined by Falcon V Systems to put increased emphasis on multi-vendor cooperation in the MSOs network to deploy RPDs, CCAP Cores, RMDs or MAC Managers from different vendors. Since the very beginning, our company has been a catalyst for driving openness and virtualization for the next-gen broadband, focused on a highly interoperable product portfolio.

That is how the initial idea of building an interoperable environment for multi-vendors transformed into OpenDAA (Distributed Access Architecture) – a modular ecosystem targeted at Communication Service Providers (CSP). It allows the CSP to decentralize and virtualize the Headend and Network functions. OpenDAA enables the CSPs to deliver all types of services by utilizing multiple access technologies such as Remote PHY, Remote MACPHY, xPON and Wireless technologies. 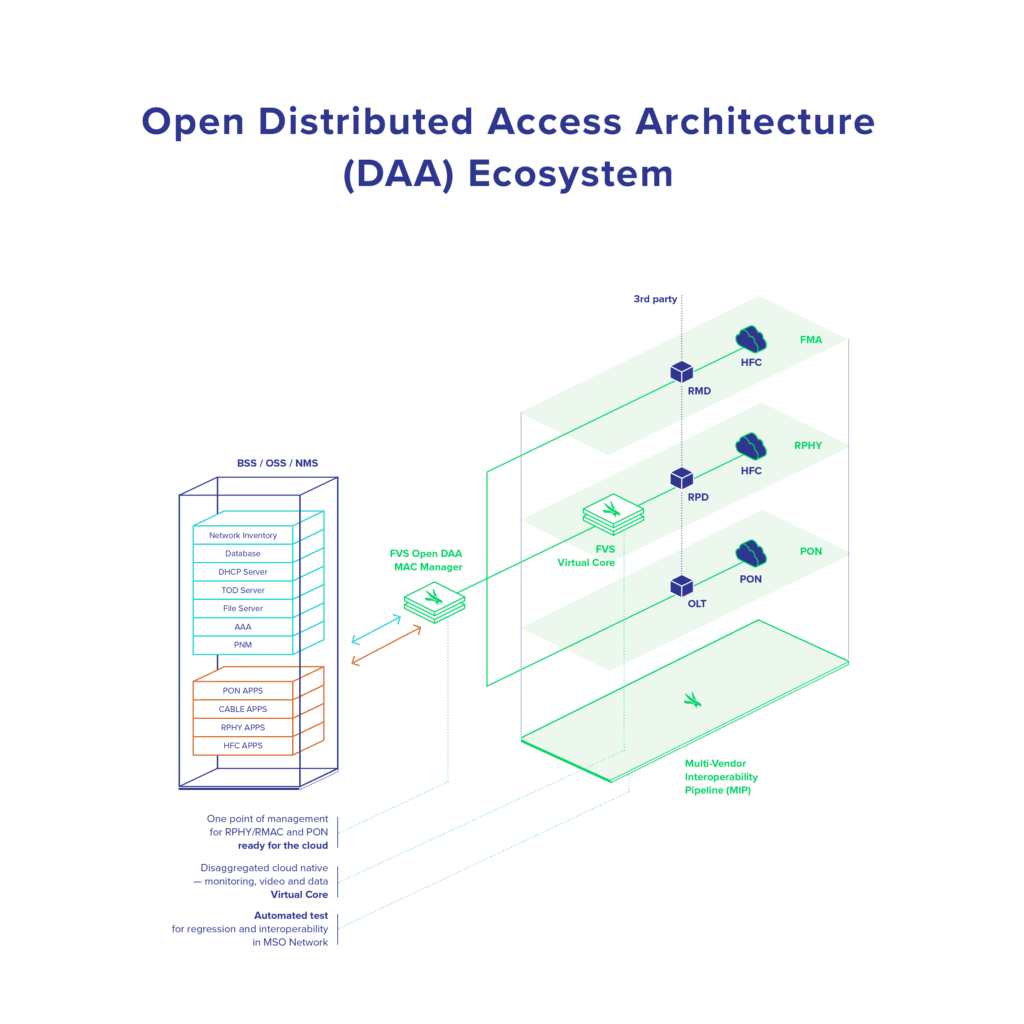 Main Goals of OpenDAA are to provide:

The innovation that Falcon V Systems brings to the industry lies in how Multiple System Operators will deliver products to their next-gen networks using Continuous Integration (CI) and the Continuous Delivery approach. We are developing a broad portfolio of separate software stacks/products that aim to reduce the delivery cycle of new features and the testing cycle for software solutions such as MAC Manager, PAG, OSS/BSS and hardware solutions such us Remote-MAC Device (RMD), enabling real cloud-native agility in cable environments.

Stay up to date

Follow our actions and projects.
Be a part of our community!

We use cookies on our website to give you the most relevant experience by remembering your preferences and repeat visits. By clicking “Accept All”, you consent to the use of ALL the cookies. However, you may visit "Cookie Settings" to provide a controlled consent.
Cookie SettingsAccept All
Manage consent

This website uses cookies to improve your experience while you navigate through the website. Out of these, the cookies that are categorized as necessary are stored on your browser as they are essential for the working of basic functionalities of the website. We also use third-party cookies that help us analyze and understand how you use this website. These cookies will be stored in your browser only with your consent. You also have the option to opt-out of these cookies. But opting out of some of these cookies may affect your browsing experience.
Necessary Always Enabled
Necessary cookies are absolutely essential for the website to function properly. These cookies ensure basic functionalities and security features of the website, anonymously.
Functional
Functional cookies help to perform certain functionalities like sharing the content of the website on social media platforms, collect feedbacks, and other third-party features.
Performance
Performance cookies are used to understand and analyze the key performance indexes of the website which helps in delivering a better user experience for the visitors.
Analytics
Analytical cookies are used to understand how visitors interact with the website. These cookies help provide information on metrics the number of visitors, bounce rate, traffic source, etc.
Advertisement
Advertisement cookies are used to provide visitors with relevant ads and marketing campaigns. These cookies track visitors across websites and collect information to provide customized ads.
Others
Other uncategorized cookies are those that are being analyzed and have not been classified into a category as yet.
SAVE & ACCEPT